Stocks, as measured by the S&P 500, would have been higher again last week if it had not been for the large cap tech stocks, this year’s market rally leaders. After year-to-date gains of 20% to 30%, the group took a breather Friday finishing with one day declines of three to four percent. Rather than dragging stocks in general along with them, funds appeared to flow into financial, energy and pharma/biotech stocks which gained on Friday. More selloff in the big tech stocks would not be unusual in coming days and weeks. Such short term guesswork has limited value. Investors focused on their long term plans should relax, avoid getting emotional, and improve their portfolios by taking advantage of lower valuations when the market makes them available.

Ahead of the Federal Reserve’s Federal Open Market Committee meeting on Tuesday and Wednesday, market rates were steady. The 10-Year Treasury finished the week yielding 2.20%, its level since the middle of April. Most Fed watchers believe the market is expecting a one-quarter percent increase in the Fed Funds rate. What is more important will be the Fed’s outlook for the balance of the year and comments on its plans for reducing the size of its massive balance sheet.

On Friday, the Atlanta Fed announced its latest estimate for second quarter GDP growth is 3.0%, down from their early May estimate of four percent. The economy continues to plod along while participants await tax, regulatory and healthcare reforms. 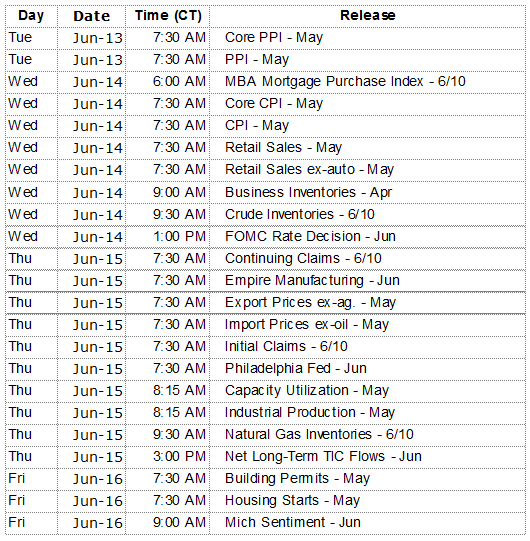