One of the greatest investors, economists and educators of all time began his lecture, Securities in an Insecure World, with the following statement:

The speech, described by Warren Buffett as one of the best he has read, goes on in varying detail to address all three of the dangers mentioned in the opening. One of the more important lessons dealt with the manner in which investors should consider market fluctuations. The lesson being, I believe, that investors should avoid over allocation to equities in bull markets when the natural tendency is to over allocate as they attempt to chase recent returns.

As long as your investment philosophy is appropriate for your situation, designed to generate sufficient long term growth while keeping risk within your level of tolerance, you do not have to be concerned about becoming over allocated. The investment process of The Trust Company of Kansas does not allow for chasing returns. On the contrary, the process uses well defined limits for all asset classes to allow for growth and contain risk appropriate for each investment philosophy. Regular rebalancing keeps portfolios from becoming over allocated in any asset class.

In these challenging of times, we are grateful a copy of the lecture has been made available. It is too long to republish in our short email memo but investors who are students of value investing and stock market history should take the time to read the transcript made available by Jason Zweig at this link.

I forgot to mention, the speech was given by Benjamin Graham on November 15, 1963, barely a year after the Cuban missile crisis and just one week before John F. Kennedy’s assassination. The Dow Jones Industrial Average finished the day about 20 points below the all-time of 760.50 which was established several weeks prior. The wisdom of Mr. Graham is timeless and as the old saying goes, “history may not repeat itself but it often rhymes”.

There were no significant “other handed” reports released last week

The economy continues its slow, relatively steady growth trend. We do not put much stock in the opinions of those who believe the age of this current recovery is a limiting factor. There are no apparent pockets of overheating. In addition, European and Asian economic data is beginning to show signs sustainable growth. The Atlanta Fed’s forecast is for real Q3 GDP growth of 3.5%. 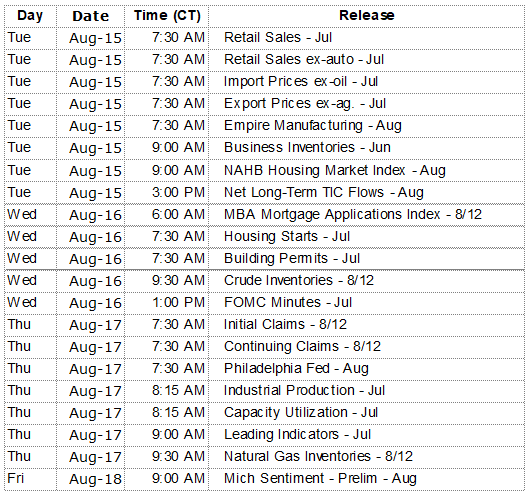