Interest rates, as measured by Treasury instruments, were generally flat for the week. Stocks advanced with the S&P 500 gaining 1.37%. Gold rose 3% to its highest level since October 2016.

As we move into September, historically the worst month for stocks, it will be interesting to watch for a turn in psychology sufficient to trigger the correction many have been looking for. Since 1950, the average S&P 500 price return for all calendar months has been about 1.30% with just 40% of calendar months resulting in a negative return. By comparison the average price return for all Septembers over the same period has been a negative 0.51% with 55% of all Septembers ending lower for the month. Note, these figures do not include the dividend return which is a significant component of stock returns.

Market history is interesting and traders have and will continue to use it to try to gain an edge. Investors however, own stock in companies in anticipation of multiple years of above average growth. Be ready to hear and read about potential September trades. If you are an investor, be an investor. Do not let yourself get conned by the hype into believing you are a trader. Investors will be watching calmly for bargains should we see another sale in September stock prices.

The majority of strategists we follow believe inflation is still in a long term accelerating trend. Most expect inflation to inch towards the Fed’s 2% inflation target near year end. The Fed’s planned balance sheet normalization is now expected to begin on October 1 and another Fed Funds increase in December is likely. On Friday, the Atlanta Fed updated its estimate for real Q3 GDP growth to 3.2%. The latest from the New York Fed Nowcast is that real Q3 GDP growth is currently 2.2%. 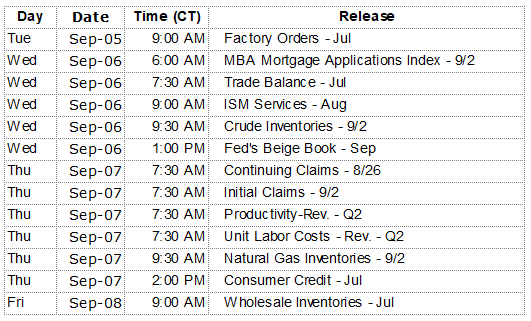