Earlier this month, psychologist and economist Richard Thaler was awarded the 2017 Nobel Prize in economics for his work in the field of behavioral economics. The study of the psychology of economics is of questionable value in the minds of many traditional economists. Economists have long struggled to have their field of study accepted as a true science and these upstarts, by adding the study of human behavior to the mix, have only set them back. The field continues to be a long way from science. By this, I mean models of physical laws and mathematics allow us to land humans on the moon and return them to Earth. Economic models, on the other hand, cannot design steadily growing economies with full employment. Nor have they been able to prevent financial liquidity meltdowns like the one of 2008-2009. Sadly, economists are doomed for the time being to be defined by the likes of John Kenneth Galbraith who said, “The only function of economic forecasting is to make astrology look respectable.”

Putting these professional debates aside, the work of behavioral economists has provided extremely useful insights into human behavior which if studied, can help each of us become better consumers and investors. The work can help us understand why the young, in good conscience, do not save enough for retirement. It sheds light on why most people, reacting normally to natural human instinct, continually make poor business and investment decisions. Read a few examples on our web site in the article, Emotional Investing.

There was no significant negative data last week.

Jobs and wages continue to show improvement. Consumers’ financial obligations are a manageable part of their incomes and serious debt delinquencies are down substantially from seven years ago.

The Atlanta Fed’s GDPNow model forecasts real fourth quarter GDP growth of 2.7%. The New York Fed’s Nowcast model increased its estimate for real Q4 economic growth by 0.4% to 2.9%. The Federal Reserve is on course to raise the fed funds rate again in December. 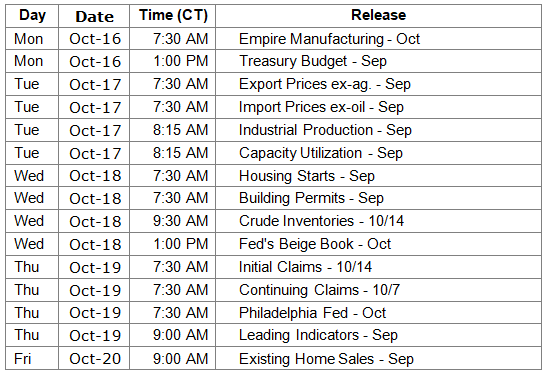