It will be a busy week for the markets. Hundreds of companies will be releasing third quarter earning’s reports. Continued favorable news from Washington on tax reform is anticipated. On Friday, the preliminary report on third quarter Gross Domestic Product will be released.

Short term interest rates have been on the rise as can be seen by the yield on the 2-Year Treasury which finished the week at 1.57%, a level not seen since October 2008. This increase has not been matched by intermediate and long term rates. The 10-Year Treasury yield closed the week with a yield of 2.39% which remains below the 2.59% yield of just one year ago.

Regardless of this week’s news and interest rate levels, focus should not shift away from our personal financial goals. A few of our goals may be short term but the vast majority will not be affected by a week’s worth of financial news, interest rate fluctuations or stock market activity. To help focus our thinking, David Ross has posted an article, Retirement Readiness, on our web site. The emphasis should always be on one’s personal goals and the processes necessary to attain them.

Some of the U.S. economic data continues to be negatively affected by the temporary impact of the recent hurricanes. These anomalies may appear in this week’s release of the preliminary third quarter GDP report on Friday. The Atlanta Fed’s GDPNow estimate is for real growth of 2.7%. The New York Fed’s Nowcast estimate declined after last week’s data to growth rate of just 1.5%. Whatever Friday’s number is, remember two things:  the Q3 GDP number will be revised several times before it goes into the record book; and third quarter data is history, meaning consumers, employees and employers are planning based on current and anticipated activity, not on what occurred in July, August and September. 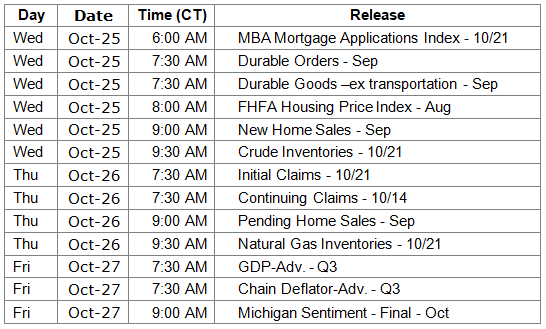