For the seventh week in a row, the S&P 500 closed at another all-time high. Bullish traders have supported their buying by pointing to what has been a good earnings season. Factset compilations note that with 55% of companies reporting, 76% of S&P 500 companies have reported positive earnings per share surprises and 67% have reported positive sales surprises. To date, the S&P 500 Q3 earnings growth rate is 4.7%.

Do not get complacent and allow yourself to become influenced by the most recent market action and accompanying noise. Allocate according to your personal financial plan and stick to your plan in both rising and falling markets. Allowing emotions to rule will result in buying near market tops when the news is rosy and selling near the bottoms when the news is gloomy.

Pending home sales, contracts on existing homes, were unchanged in September after declining 2.8% in August. The continued lack of supply of existing homes available for sale continues to hinder the ability of potential first time home buyers to leave the ranks of renters.

Third Quarter GDP came in stronger than expected and even higher than the 2.2% average growth rate of the current expansion, but the markets aren’t signaling the US economy is beginning to accelerate. At the same time, there are no signs of an end to this expansion. 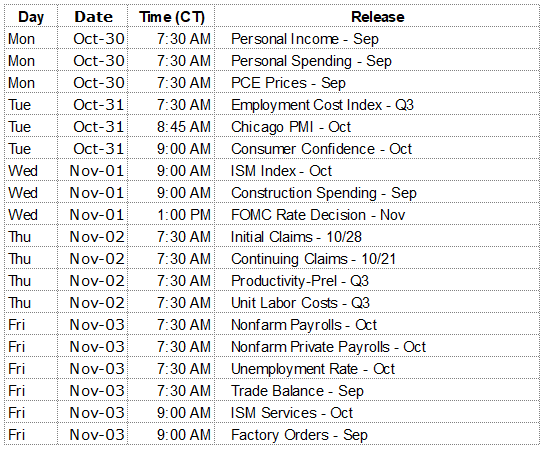