On the economic front, the current economic cycle is far from overheating and should continue its growth trend barring an external shock of some sort. As growth continues, corporate earnings should continue to improve. Headwinds may come from the Fed as it continues to raise its fed funds rate and reduce its role in the fixed income markets. We will hear from the Fed this Wednesday when the FOMC makes its rate announcement for December, widely expected to be an increase of one quarter of one percent.

Make sure your plan has taken the potential risk of increased volatility into account.

Job growth was strong but wage growth lagged. The low unemployment rate and description of the labor market as tight, ignores two important facts, the low labor participation rate and the rate of underemployment (U6). While slightly higher than year ago levels, the labor participation rate continues at a low rate of 62.7%. Including the number of underemployed, the U6 unemployment rate is a relatively high 8.0%. There is considerable slack in the labor market and growth can continue without much fear of a wage push to inflation. 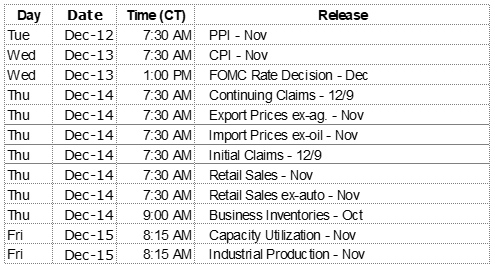