The S&P 500 finished the week at 2,675.81, another new high. Year-to-date, the index is up 19.52% and if the year had ended on Friday it would have been the 4th largest calendar year gain for the index so far in this century. If the index can at least hold onto its current month-to-date gain of 1.49%, December will be the ninth month in a row of up months; a string of monthly gains not seen since the 1950s.

The Wall Street Journal reported 4.6 million Americans are severely behind on payments on federal student loans, double the number from four years ago. At the end of the third quarter, defaulted student loans totaled $84 billion, or 13% of the $631 billion in repayment status.

President Harry Truman on economists:  I was in search of a one-armed economist so that the guy could never make a statement and then say, “on the other hand”.

Consumers were spending and price increases were moderate as we moved into the important retail season. The Fed is satisfied the expansion is healthy enough to normalize short term interest rates. In the latest release, the Atlanta Fed raised its Q4 real GDP forecast to 3.3% growth. 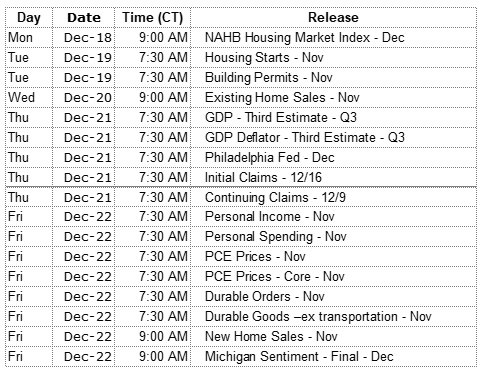