Why are there bonds in my portfolio? Over the weekend, Berkshire Hathaway released its 2017 annual report along with Warren Buffett’s annual letter to shareholders. One section of Mr. Buffett’s letter addressed the risk in owning bonds and has folks questioning diversification.

Investing is an activity in which consumption today is foregone in an attempt to allow greater consumption at a later date. “Risk” is the possibility that this objective won’t be attained.

By that standard, purportedly “risk-free” long-term bonds in 2012 were a far riskier investment than a long term investment in common stocks. At that time, even a 1% annual rate of inflation between 2012 and 2017 would have decreased the purchasing-power of the government bond that Protégé and I sold.

I want to quickly acknowledge that in any upcoming day, week or even year, stocks will be riskier – far riskier – than short-term U.S. bonds. As an investor’s investment horizon lengthens, however, a diversified portfolio of U.S. equities becomes progressively less risky than bonds, assuming that the stocks are purchased at a sensible multiple of earnings relative to then-prevailing interest rates.

It is a terrible mistake for investors with long-term horizons – among them, pension funds, college endowments and savings-minded individuals – to measure their investment “risk” by their portfolio’s ratio of bonds to stocks. Often, high-grade bonds in an investment portfolio increase its risk.

What he stated is true, every word of it. So be sure to read every sentence carefully. Mr. Buffett is not criticizing the use of bonds in all portfolios but rather their use in long term portfolios with time horizons of several decades or more. And don’t skim over his clarification that stocks are “far riskier” than short term bonds over periods of days, weeks, and even years.

Your portfolios are allocated according to your personal time horizons of which you may have several. There will be little or no bond allocation in that portion of your portfolio which is invested for your horizons which span decades. Bonds in this case are a terrible investment. They are very risky investments over decades during which maintaining and growing purchasing power is necessary. There are, however, bonds in the portion of your portfolio which is invested for time horizons of several years or less. Those periods during which a stock market correction of ten, twenty, or even thirty percent or more are possible.

A final point to consider, do you have the ability to control your behavior like Warren Buffett? The normal human emotional reaction to short term declines in portfolio value is a powerful influence which can overwhelm clear thinking and lead to panic selling. Few have Mr. Buffett’s ability to stay focused on the next decade when they see their stock portfolios decline in value three of four quarters in a row. Bonds are not risky in that portion of your portfolio used to manage your shorter term time horizons.

Existing home sales declined 3.2% in January to a seasonally adjusted annual rate of 5.38 million. Annually, sales are down 4.8%, the largest annual decline since August 2014. The median existing single-family home price was $241,700, 5.7% higher than the year ago level. The inventory of existing homes for sale was 9.5% below year ago levels.

Last week’s light calendar of economic data releases shed little new light on the trends of growth or lack thereof in the U.S. economy. The GDPNow forecast for real Q1 growth stands at 3.2%. 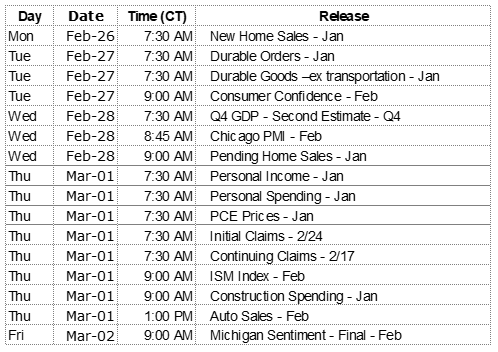