There are few sources of enduring investment truths as dependable as Warren Buffett. Last week’s update pointed out the necessity of identifying the different risks associated with the varying time horizons a portfolio might have. The main point was, in a long term portfolio, the risk of the compounding loss of purchasing power as a result of even low rates of inflation is by far the greatest risk an investor faces. Today, we will point out one last timeless truth mentioned by Mr. Buffett in his 2017 annual letter to Berkshire Hathaway shareholders.

Though markets are generally rational, they occasionally do crazy things. Seizing the opportunities then offered does not require great intelligence, a degree in economics or a familiarity with Wall Street jargon such as alpha and beta.  What investors then need instead is an ability to both disregard mob fears or enthusiasms and to focus on a few simple fundamentals. A willingness to look unimaginative for a sustained period – or even to look foolish – is also essential.

Markets do crazy things over periods of days, weeks and even long stretches of months. During such periods financial pundits say crazy things. Successful investors filter out such noise and stay focused on the long term fundamentals.

Disregarding the mob’s enthusiasm or its fears is a simple mission which, for many, can be very difficult to carry out. In addition to our capacity to think and act logically long term, as humans, we have emotions and instincts which, while very useful in protecting us from sudden, short term threats, can overwhelm our thinking and logical selves at times. Buffett’s admonishment to ignore the noise and stay focused on the fundamentals is critical. It does take effort and it may be uncomfortable for a time as the mob around us reacts to short term craziness. Ignoring the pundits will seem foolish to some and they will ease their pain by buying at market tops or selling at market bottoms. Those who cannot separate their long term thinking from their short term thinking will feel immediate relief as they join the crowd. Shifting their focus away from the simple fundamentals, however, will nearly always have a negative effect on their long term portfolio returns.

The new Fed Chairman, Jerome Powell, appeared before committees of both houses of congress last week and the House and Senate last week. His pronouncements were as expected. The economy is growing. There are no signs of overheating. There is no evidence of a strong increase in inflation. The new tax law should lead to higher investment which will lead to higher productivity and ultimately higher wages over time. There are no changes to previously announced Fed rate hikes and balance sheet reduction. 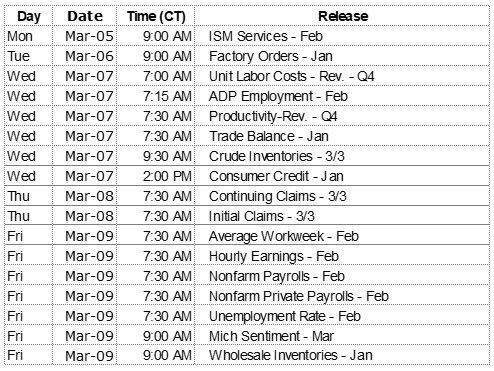 The information provided is obtained from sources believed to be reliable. Forecasts cannot be guaranteed. Past performance is not a guarantee of future results