Stock indexes continued to hold above the recent correction’s lows last week as the first quarter earnings reports began to trickle in. The season will shift into higher gear this week as companies like Netflix, Bank of America, Bristol-Meyers Squib, Merck, Honeywell and Schlumberger report, not only their revenue and earnings for the quarter just ended, but provide guidance on their expectations for business during the balance of the year. Investor interest in this quarter’s reports is greater than usual due to the fact this will be the first meaningful analysis of business prospects we will have received since the corporate tax cuts were enacted.

1. The Producer Price Index (PPI) increased 0.3% in March, exceeding the consensus expected rise of 0.1%. Producer prices are up 3.0% versus a year ago.

2. The Consumer Price Index (CPI) declined 0.1% in March. The CPI is up 2.4% from a year ago. Real average hourly earnings rose 0.4% in March. Real average weekly earnings are up 0.9% in the past year. This earnings data does not include irregular bonuses – like the ones paid by companies after the tax cut.

The preliminary university of Michigan Consumer Sentiment Index for April was reported at 97.8. The decline from 101.4, the final reading for March, was blamed on concerns about trade policies.

The volatile Atlanta Fed GDPNow estimate declined to 2.0% in its latest analysis. 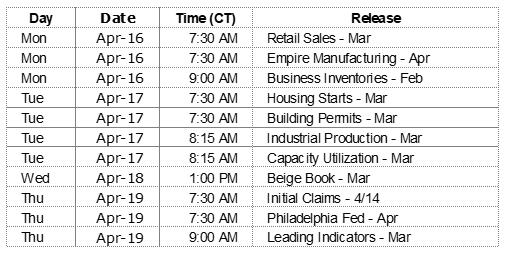