The estimate for corporate earnings growth for the first quarter of this year now stands at 21%, up from 18% at the beginning of April. Although slightly lower for the week, stock prices in the month of April have responded positively. As of Friday, April month-to-date increases in the indices have been 1.1% for the S&P 500, 2.6% for the Dow Industrials, and 3.8% for the NASDAQ. Two-thirds of the S&P 500 constituents, by market cap, have yet to report Q1 results.

Last week the yield on the benchmark U.S. 10-year Treasury note topped 3% for the first time in over four years, putting it one-half of a percentage point higher since the beginning of the year. The 2-year and 10-year notes finished the week at 2.24% and 2.96%, respectively, leaving the spread at 48 basis points and nowhere near the inversion market watchers have been fretting about.

With the improvement in compensation rates we are looking for at least a small increase in the employment participation rate in coming months.

The University of Michigan’s detail on its sentiment survey indicate consumers do not anticipate an imminent downturn in the economy, but the length of the expansion has left them apprehensive about future trends.

With the first official Q1 report behind us, the Atlanta Fed is now looking at Q2 with an early GDPNow forecast of 4.1% real growth. 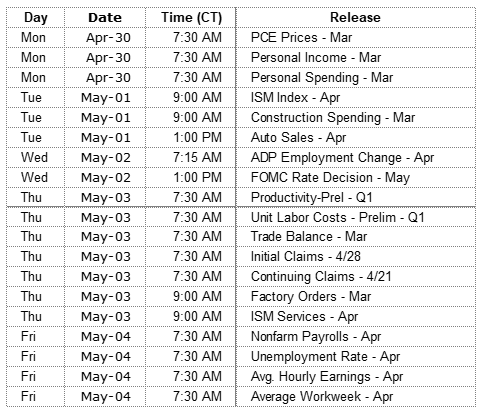