The earnings per share growth rate for companies reporting to date has been 27.3%, lifting the blended growth estimate for all S&P 500 companies to 25% from the original estimate of 18%. In response, the financial news headline generators are cranking out a parade of potential threats which might be holding stocks back or worse, send them lower.

Stock price movement over the past 3 or 4 weeks is insignificant. As we have said many times before, short-term market moves are emotional, fickle and unpredictable. Financial news sources do not know what your plans are for buying a house, educating your children, or investing for your retirement. They have no fiduciary duty to report what is in your best interest. Those news sources depend on attracting viewers in order to generate ad revenues and it is well known that bad news is what attracts viewers.

Investors are emotional, we cannot help it. Yet, we look for rational explanations for each of the daily, weekly, monthly and quarterly changes in market prices. A look through history shows short-term moves are based on unpredictable emotions. In fact, the market declined in the short-term because sellers were more anxious than buyers. The reverse is true for up days, buyers were more anxious than sellers. Throughout history, the causes of anxiety have seldom, some would say never, developed into significant, rational reasons for overhauling one’s investment portfolio.

Long-term investors might take a step back and realize that after the straight-up increase of 57.07% in the S&P 500 between February 11, 2016, and January 26, 2018, and the meager 10.16% correction which is still in the process of being tested, the rebound in earnings which has been anticipated is occurring. A rational analysis of recent news recognizes there has been some surprise in earnings to the upside but we had already experienced considerable surprise to the upside in stock prices over the last several years in anticipation of the current earnings rebound. This may be the high-water mark in terms of earnings growth rates but this does not mean earnings are about to decline. We fully anticipate earnings growth to continue into the foreseeable future, just not at the recent 25% annual rate.

The GDPNow™ estimate for Q2 real growth continues to stand at 4.0%. 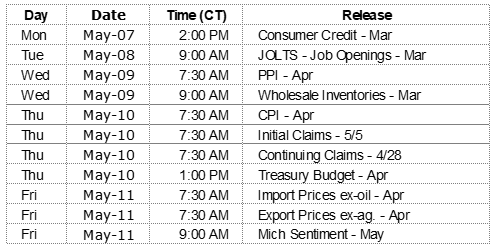