Interest rates have done little during the weeks of the recent correction. The 2-year and 10-year Treasury yields are 2.80% and 3.18%, respectively, exactly where they were at the market high on September 20th.

The first Q3 real GDP report put the growth rate at 3.5%. The Atlanta Fed expects Q3 GDP growth to be revised slightly higher to a 3.6% growth rate. Looking to the current year’s fourth quarter and beyond into 2019, expansion continues to be the most likely course for the economy.

Reports indicating the Fed is on a path of action which will bring the expansion to an end by raising interest rates too high, too fast are premature. The Fed’s Beige Book reports, “Economic activity expanded across the United States, with the majority of Federal Reserve Districts reporting modest to moderate growth” and “Prices continued to rise, growing at a modest to moderate pace in all Districts.” Given statements like these, why would anyone think the Fed is likely to increase interest rates at anything greater than a “modest to moderate” pace? The U.S. economy is not so fragile as to buckle under such interest rate increases. 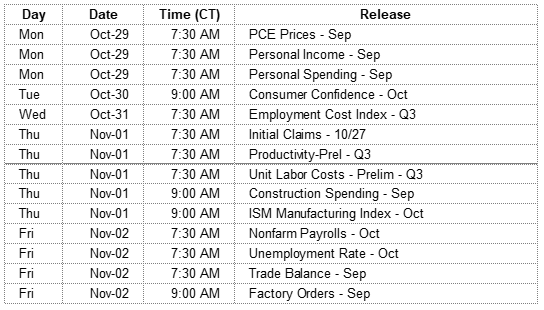