The stock market correction stalled last week. One of two headwinds was eliminated when Fed Chairman, Jerome Powell, confirmed the members of the Federal Open Market Committee are not the ill-informed, mindless and stubborn group many self-serving market participants and commentators had declared them to be in recent weeks. The market gained 4.85%, as measured by the S&P 500, last week.

The second economic headwind fueling the decline in prices since late September has been the concern trade disputes and increasing tariffs would escalate into all-out trade war. Market mavens placed a good deal of emphasis on the outcome of the G20 summit and the Saturday evening meeting between Presidents Trump and Xi-Jinping. No formal statements have been released but comments have been positive enough that stock index futures are signaling higher stock prices Monday morning.

Neither of the two previously mentioned headwinds indicated a long-term change in course for investors. We continue to believe a Fed engineered recession and/or trade wars are low probability events at the present time. Portfolios across all investment objectives are positioned for continued growth in the economic cycle through most of 2019. Double digit percentage gains are not likely but financially sound, well managed equities should outperform fixed income investments over the time horizons of the vast majority of clients.

“Pre-tax corporate profits rose 3.4% in the third quarter – the fastest quarterly growth rate since Q2 2014 – and are up 10.3% in the past year, the largest four-quarter increase since mid-2012 (and thanks to the tax cuts, after-tax profits are up nearly 20% in the past year). Plugging this data into our capitalized profits model puts our estimate of “fair value” for the S&P 500 at 3,614, or roughly 35% above yesterday’s closing value. Even if the 10-year Treasury yield (the denominator in our model) rose to 3.5% today, the market would still be undervalued by nearly 20%. In other words, the correction we have seen since mid-September is emotional, not logical, and we expect markets to move higher in the months ahead.” 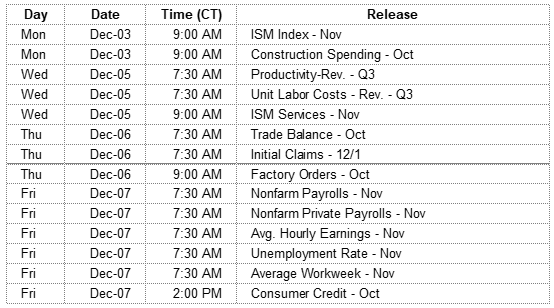