Stocks, as measured by the S&P 500, were up another 1.45% last week. The yield on the benchmark 10-Year Treasury also continued higher and was up four basis points to 2.37%.

Rising stock prices and declining bond prices (higher interest rates) is generally the norm. In a free market, economic expansion leads to increased demand for capital which pushes interest rates higher. Bond prices decline in a rising interest rate environment. Economic expansion also creates opportunity for increased corporate earnings which in turn supports higher stock prices. Over time, it is common to experience a rising stock market in the face of the Fed “normalizing” by raising its Fed Funds rate. During expansions, the stock market will experience corrections.

Market corrections can occur at any time. It is not a given the Fed’s rate increase will trigger a correction but it does not mean an increase will not happen. It is best not to try to time the market. One cannot consistently call market tops and the resulting bottoms. Jason Zweig provides a reasonable definition of market timing in his book, The Devil’s Financial Dictionary,

Market Timing, n. The attempt to avoid losing money in bear markets; the most common result however, is to avoid making money in bull markets.

ON THE ONE HAND

ON THE OTHER HAND

ALL ELSE BEING EQUAL

The minutes of the Fed’s November Open Market Committee meeting were released last Wednesday. “Most participants expressed a view that it could well become appropriate to raise the target range for the federal funds rate relatively soon, so long as incoming data provided some further evidence of continued progress…” The data since the meeting has continued to provide evidence of an improving labor market and somewhat higher inflation. Market rates have continued to move higher. Most expect the Fed to get in the game at the next FOMC meeting, December 13 & 14. 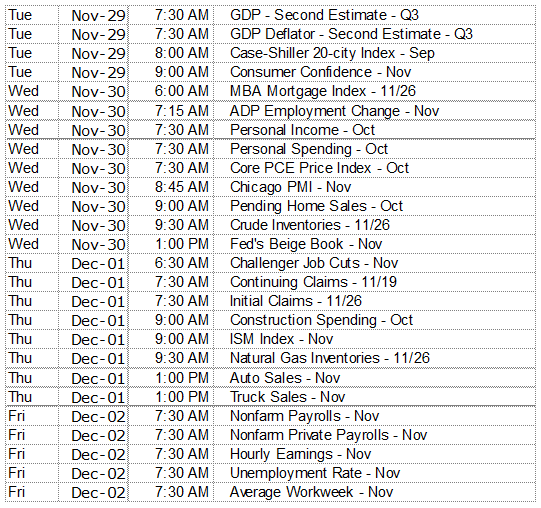