One of the financial writers I follow began his Wednesday afternoon post with the headline, “The Fed didn’t tighten today”. Scott Grannis, retired economist and financial professional, summarized current interest rates and the Fed’s long awaited rate decision better than I can:

The Fed increased its target short-term interest rate today to 0.75%, but that doesn’t represent a tightening of monetary policy. It would be more correct to say that today monetary policy became slightly less accommodative. Neither the market nor the economy has anything to fear from today’s Fed action. Financial markets today enjoy plentiful liquidity conditions, and confidence in general is rising. Interest rates have adjusted upwards slightly to reflect this. Remember: higher interest rates don’t threaten growth; interest rates are higher because growth expectations are somewhat stronger.

U.S. stocks, as with stocks around the globe, were flat last week. Yields rose again leaving the 10-Year Treasury note yielding 2.60% up from 2.46% the previous Friday.

This is a weekly note so short-term market action and recurring weekly and monthly economic releases are presented. We cannot stress enough, however, the relative insignificance of the movement in these weekly and monthly data points compared to your personal goals and planning. A week’s worth of economic data and market action can help to clarify the current environment, but it will not and should not change your life’s goals. Focus on your personal success. That is our mission. 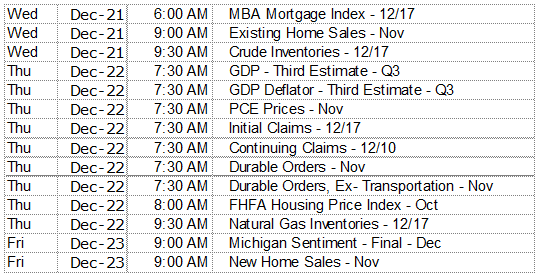