How can this be? Rekenthaler explained:

“That finding directly contradicts what I have often written, which is that stocks rise more often than they fall.  …my statement remains correct, as long as it’s understood that “stocks” is shorthand for “the stock market overall,” or at least “a large pool of securities.” The statement is false if applied to a single holding.”

The study went on to explain “half of U.S. stock market wealth creation has come from just 0.33% of listed companies”. This finding leaves no doubt broad diversification is critical for both reducing volatility and increasing return.

In last week’s notes, we mentioned the need for the hard data reports to confirm the positive results we have seen in recent consumer and business sentiment surveys. This confirmation was generally lacking in this week’s economic releases. A fraction of one month’s data is not sufficient to make a call one way or the other. Remember, also, data released this week will be revised in coming months. The slow growth trend is intact but the anticipated acceleration is not yet showing up in the data. 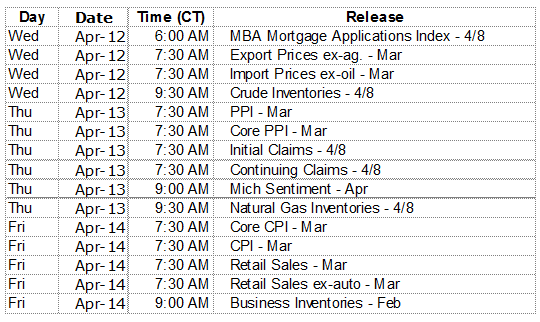