With 83% of the companies in the S&P 500 reporting, 65% have exceeded the average revenue estimate and 75% have beaten the average earnings per share estimate, according to FactSet Research. Earnings growth for the S&P 500 for Q1 is 13.5% as of current reporting.

The market has moved higher since the end of the first quarter supported in part by the positive earnings releases. A rising denominator in the P/E multiple helps support stock prices. As always, there is plenty to worry about but for the time being Mr. Market has chosen to ignore increased federal debt, the potential for substantial interest rate increases, unfunded public pensions, domestic political turmoil, geopolitical risks, etc. There will be plenty of focus on some or all of these negatives at some unpredictable time in the future. For now, however, Mr. Market seems to be in the mood to party.

First Trust summarized last week’s Fed meetings well. “The most important part of today’s statement from the Federal Reserve is that it thinks the slow economic growth in the first quarter is temporary. As a result, the market consensus on the odds of a rate hike by June rose to about 94% after the meeting from about 67% beforehand.

The Fed made other relatively minor changes to its statement, but nothing that should change anyone’s impression of where the Fed is headed. The Fed noted slower consumer spending recently, but said the “fundamentals” supporting consumer spending “remained solid.” No one dissented from the statement, which suggests that even the “doves” are on board with further rate hikes.” 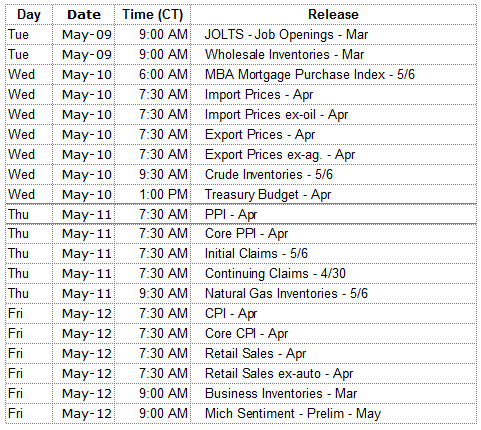