The S&P 500 Index finished the week with a close over 2,600, a new high. The 10-Year Treasury Note yield held steady at 2.33% while the yield on the 2-Year continued to edge higher and closed the week yielding 1.75%. The current economic numbers continued to display the U.S growth cycle trudging higher.

Get ready for the 2018 forecasts. Their inability to predict anything close to what we have lived through in 2017 will not prevent the forecasters from returning with comprehensive predictions for the coming twelve months. Some will be entertaining. A few will contain useful insights. The data proves the experts are no better at predicting the future of the economy and markets than the informed, average person on the street.

In 2018 and beyond, we will benefit greatly from the tailwinds of the digital revolution which is still relatively young. Like its predecessor, the industrial revolution, it will provide unimaginable benefits to humankind. The process will also be disruptive at times in the short term. The cultural, political and business models which were built up around industrialization are in the process of being transformed in ways yet unimaginable. We are thankful for the benefits which have been bestowed on us and hopeful we will be able to deal with the adjustments necessary in the future as our predecessors were in shaping the previous revolution.

Goods Orders in October were down 1.2%.

The headline decline in durable goods orders was almost entirely limited to the typically volatile aircraft sector. New orders excluding transportation – a more reliable measure of the health of durable goods – were higher by 0.4% in October, continuing a steady rise which began in mid-2016.

The next revision of Q3 GDP, due to be released on Tuesday, is expected to come in at 3.2% up from the initial release of 3.0%. The Atlanta Fed’s GDPNow forecast for real Q4 GDP held steady at 3.4%. 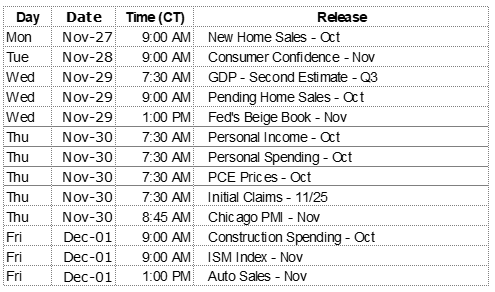